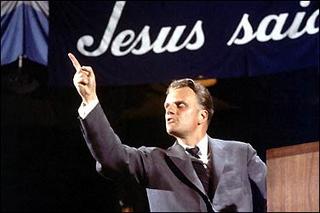 I watched a re-run of a Billy Graham crusade from 1983 last night. Actually, I always watch Billy Graham re-runs no matter what I am doing or what else I was watching. If I flip past it, I stay until it's over. Heather thinks I am crazy, and maybe I am, but it is just mesmerizing to me. I realized what it was that captivated me the first time I ever saw him on T.V.

Billy Graham is pretty bad. No, I just said that out of respect, Billy Graham is really bad. Let's just face it, his public speaking abilities leave much to be desired. He has an outline, but he reads almost directly off of it. His stories often don't seem to be logically connected. And, he talks about all this stuff that just makes people squirm like "blood," and "being nailed to a cross," and more "blood." There's a choir, and to top everything off... HE USES KING JAMES!!!! Oh, the humanity, that isn't "seeker sensitive" at all!

So why do I watch until the very end? I'll give you a hint. It's not because it ends like a train wreck. It is because it ends with a choir singing "Just as I Am" and thousands and hundreds of people stepping forward to let the world know that they are making Jesus Christ their Lord and Savior. In todays environment where churches often model themselves after successful businesses it always humbles me to see what happens when God blesses an endeavor. Billy Graham lived the words of the apostle Paul, "I did not come to you with fancy words, I came with the power of God" (JPV = the Jared's Paraphrase Version).