The Gospel and Sea Turtle Eggs 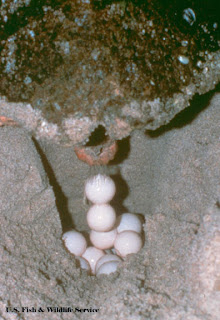 There are a lot of suburban white people (and their children) who are allergic to clearly defined lines and boundaries. If you draw a line in the sand about a doctrine or a truth, they whine about how people should be having a "conversation" about it instead of being bull-headed. I think this is bull-crap.
There is, of course, a normal way of knowing that leads to arrogance. I know all about this, I've prided myself on my intelligence for most of my life despite knowing that God says that man's wisdom is foolishness to God. Knowledge made me arrogant, or as Paul says in the Bible: knowledge puffs up, while love builds up. So God did what God always does with the arrogant. He cared too much to leave me that way so he graciously humbled me. Hard.
Regardless, Paul goes on to say that "knowledge puffs up while love builds up. Those who think they know something do not yet know as they ought to know. But whoever loves God is known by him." You see one of the reasons that very religious people are often intolerable is because they have knowledge, and they have truth, and they have right doctrine, and they have right-er doctrine than everyone else. And that knowledge puffs up and they are arrogant and right all the time. I can't stand people who are always right (funny how that is so often myself...).
I think that in regard to religion many people find their justification in being right. Or to use religious language: they make an idol out of correct doctrine.
But the gospel is different than religion. The gospel brings us to a place where we are accepted and justified based on the work that God has done. Not on how correct our doctrine is or how much knowledge we have. If you are justifying your existence through knowledge you will be arrogant when you are right and neurotic and embarrassed when you find out you are wrong. It will be absolutely necessary to win arguments because you are not discussing ideas, but justifying your own existence. But when you really grab hold of the gospel you have no inner need to win every argument because you know that you are accepted and justified not on the basis of what you know or how much you know, but on the basis of the one who became utter foolishness so that we could gain the true knowledge of the Lord. That is, we could be known by him, because "everyone who loves God is known by him."
My friend Brian Miller and I used to argue for hours at a time. And I'm sure you remember the days before the internet or iphones when an argument could only be settled with a dictionary, and encyclopedia, a library, or an expert. Arguments could literally go on forever! Brian and I would argue about everything, and he was an expert arguer. I specifically remember the time we argued about how many eggs sea turtles lay (and I remember this because it is one of the few arguments I won. The answer: over a hundred.). But when we argued it was for fun, or more likely, to win. The whole point was in the argument itself. Who was a better arguer? This is the opposite of gospel knowledge. Paul says that true knowledge brings a relationship between the knower and the known. And so it is with God. If your knowledge of God doesn't make you more like him: more humble, more generous, more sacrificial, then it is just like an argument over sea turtle eggs.
Only the gospel brings you to a place where you can be both bold in your assertion of the truth and humble in your grasp on it.