Are you guilty of this strange sin? 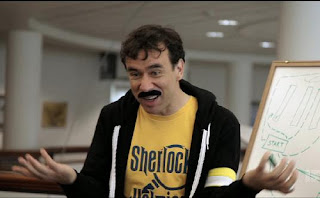 I'm not normally the guy that thinks up strange new ways to sin, but I was reading Lectures on Revivals of Religion by Charles G. Finney and he was talking about breaking up your fallow ground.  Or in other words softening your heart.  And he was asking believers to examine themselves and catalogue their sins so that they could repent of them one-by-one.  There were the normal sins you'd think of: cheating, lying, laziness, wastefulness, ingratitude, lack of prayer.  And all this was quite enough to convict me (thank you very much).  But there was one sin in the list that surprised me, convicted me, and, I felt, cut through to much of our culture at large.  And seeing as how it is normally ignored it struck me.

It is the sin of levity, or making light of a grave situation. Finney says:


How often have you trifled before God, as you would not have dared to trifle in the presence of an earthly sovereign? You have either been and Atheist, and forgotten that there was a God, or have had less respect for him, and his presence, than you would have for an earthly judge.

Some people are naturally serious about spiritual matters and have hearts deeply compassionate and serious for serious matters, not that they never laugh, but they just don't laugh at the most serious of subjects.  The rest of us often use humor to diffuse uncomfortable situations.  We don't link thinking about sin or hell so we joke about it.  We don't know what on earth to say when someone confesses something serious to us so we make a little joke to cut the tension.  We act in front of God as we would never dream of acting even in front of a traffic court judge.

Now the point is not that we all become serious people who never laugh or have fun.  John Calvin, of all people, used to play Skittles with the city children on the Sabbath.  The point is that in an age characterized by irony and irreverence, the gospel calls us to a level of reverence that we could never have achieved on our own.  Because the gospel teaches us that we are in a more desperate situation than we had ever imagined.  But because of the cross this leads to more joy, not less.